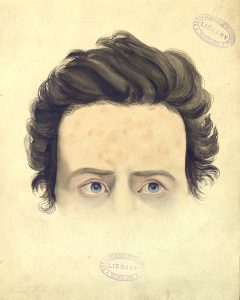 William Wallace (1791-1837) was a Licentiate of RCSI and an early pioneer in the field of dermatology in Ireland. He was active during his lifetime in Dublin and London and was well-known in international circles for his work in the study and treatment of skin conditions and venereal disease. Wallace is best known as the founder of the Dublin Infirmary for Diseases of the Skin (1818-1837) and for pioneering the use of potassium iodide as a therapy for cutaneous disease. Wallace also proved the infectivity of secondary syphilis, albeit unethically, by inoculating healthy persons with matter from active lesions to inform his research.

Wallace is a controversial figure and his contributions to modern medicine have been overshadowed by his questionable methods and unethical approach to research. His name lives on today in the vast collection of medical illustrations relating to the study of skin diseases that he amassed during his lifetime. The William Wallace Papers consist of thirteen meticulously kept patient catalogues containing detailed descriptions and hundreds of illustrations depicting the ailments from which his patients suffered.

Wallace kept a number of casebooks relating to these patients in which he recorded their name and occupation alongside details of their ailment and observations on treatment and progression. The accompanying illustrations were commissioned by Wallace from various artists in preparation for a medical atlas relating to venereal and skin disease. This atlas never materialised, possibly as a consequence of Wallace’s untimely death, but his patients live on in those sketches undertaken at the Dublin Skin Infirmary.

These illustrations, though graphic in nature, are testament to the extent that our understanding of the treatment and spread of skin disorders and sexually transmitted disease has progressed in the 200 years since they were created. The physical signs of disease depicted in these artworks are distressing to the modern eye precisely because they are largely a thing of the past thanks to advancements in modern medicine. We have Wallace to thank, in part, for that.

Read more about Wallace’s life and career in the bio below, or explore the William Wallace Papers in full here.

Who was William Wallace?

William Wallace (1791-1837) was born in Downpatrick, Co. Down. He was indentured as an apprentice to Dr. Charles Bowden of the Apothecaries Hall in Dublin at the age of 17 and two years later in 1810 enrolled as a student in the Royal College of Surgeons in Ireland. During his time at RCSI, Wallace worked as an apprentice to Charles Hawkes Todd, Lecturer in Anatomy. Todd was also surgeon to the Richmond and Lock Hospitals, both of which had large numbers of patients with venereal and skin disease, and it was here that ‘gave to (Wallace’s) mind its first bias to the study of cutaneous and venereal diseases’.

Wallace received his License from RCSI on 8 June 1813 and immediately travelled to London for postgraduate study. Wallace became a pupil of Thomas Bateman, who was in turn a former pupil of the founding father of modern dermatology, Robert Willan. Wallace also studied under John Pearson in the London Lock Hospital and Carey Street Dispensary, the latter a charitable institution that dealt with high numbers of working class patients with skin diseases. While in London, Wallace was introduced to the art inoculation and vaccination under the tutelage of Dr. Joseph Adams, an expert in venereal disease and physician to the Inoculation and Small Pox Hospital in London.

Whether by accident or by design, Wallace found himself at the centre of one of the most influential circles for the study of cutaneous diseases in the medical world at the time, working with some of the leading experts in the field.

Wallace returned to Dublin in 1817 to establish himself in the Irish medical profession. The city Wallace returned to had a population that was increasing at an alarming rate as the poor migrated towards the city. There were no sanitation facilities, conditions were squalid, and poverty rife. Influenced by his time spent ministering to the working classes in London, Wallace wished to establish a similar charitable venture for the treatment of skin diseases in Dublin.

With financial support in the form of private donations from wealthy citizens, Wallace established the Dublin Infirmary for Diseases of the Skin at 20 Moore Street in 1818. The Dublin Skin Infirmary dealt with 1,775 patients in its first year of operation, 1,400 of whom were classed as ‘cured’ on discharge. It dispensed both medicines and advice to patients, and utilised medicated baths and ‘fumigation apparatus’ in the treatment of diseases such as scabies, leprosy, impetigo, scarlet fever, ringworm, tuberculosis of the skin, psoriasis, and various venereal diseases.

By 1837 it was recorded that 25,000 cases had been dealt with by the Dublin Skin Infirmary. Wallace’s work was recognised internationally: reference was common to the work being carried out by ‘Wallace of Dublin’ and he was known for his innovative use of potassium iodide in the treatment of venereal diseases. By the 1830s, Wallace was conducting research into venereal disease to determine its underlying causes and explore incubation periods and modes of transmission. In order to do so, he purposely (and, in most cases, unknowingly to the patient) infected people with venereal disease and observed its progress to inform his research. While the results of his research were not widely accepted at the time, Wallace felt that his work was crucial to understanding how best to combat and inoculate against venereal disease.

On 2 December 1837 Wallace visited a patient who was suffering from highly infectious typhoid fever. Within a week, Wallace was dead. He was 47 years old.