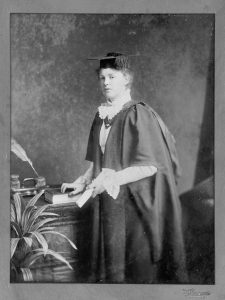 Emily Winifred Dickson (1866-1944) was the first female fellow of RCSI and one of a small group of pioneering female doctors active in Ireland in the 1890s.

The Emily Winifred Dickson Papers were presented to RCSI in March 2012 by her grandson, Dr. Niall Martin, and other family members in memory of her life and achievements. The Dickson Papers comprise medical certificates, correspondence, photographs, medals and other personal effects, as well as published material and newspaper cuttings relating to her life and medical career. The papers also includes documents relating to the family history and genealogy of the extended Dickson and Martin families.

Read more about Dickson’s extraordinary life and achievements in the bio below, or explore the Emily Winifred Dickson Papers here.

Who was Emily Winifred Dickson?

Emily Winifred Dickson was born in Dungannon, Tyrone, in 1866, the second youngest of seven children. An exceptionally bright student, Dickson was educated in Belfast and London before enrolling in the Royal College of Surgeons in Ireland to study medicine at the age of twenty-one in 1887. Women were first permitted to enroll in RCSI as students two years earlier in 1885, and Dickson was the only female student in her class. Dickson won several prestigious medals during her time at RCSI – several of which survive with her papers – and gained clinical experience at Sir Patrick Dun’s Hospital, the Rotunda Lying-In Hospital and the Richmond Lunatic Asylum before qualifiying as a Licentiate of the College in 1891. Dickson subsequently became the first female Fellow of the Royal College of Surgeons in Ireland in 1893.

Dickson enjoyed a successful medical career in Dublin during the 1890s. In 1895, she was appointed gynaecologist to the Richmond, Whitworth and Hardwick Hospital, where she worked for four years. She was also appointed assistant master to the Coombe Lying-In Hospital, for which she became supernumerary assistant in 1894. Dickson took a doctorate in medicine at the RUI in 1896, as well as the degree of master in obstetrics, receiving honours in both. She was appointed examiner in midwifery to the Royal College of Surgeons in Ireland in 1896/97, but applied unsuccessfully for the position of Professor of Obstetrics in the School of Midwifery in 1898.

Dickson was one of a very small group of pioneer women doctors in Dublin in the 1890s. By 1911, two decades after Dickson graduated from RCSI in 1891, there were still only forty-two female medical practitioners in Dublin. Despite the practice of medicine remaining a male dominated profession, Dickson was broadly supported in her career by the Irish medical community, as the number of letters of recommendation that exist in her papers from her former lecturers and peers attest. A photograph taken of the medical staff at the Richmond Hospital during Dickson’s time there shows an all-male staff with the exception of Dickson

She attended and presented at meetings of the Royal Academy of Medicine in Ireland and was an active participant in the women’s suffrage movement. At a meeting of the Irish Suffrage Association in Dublin in 1895, she urged ‘the necessity of well-to-do women taking an interest in questions which affected working women’. The provision of adequate medical care for working class women was an ongoing area of interest for Dickson. She wrote to the British Medical Journal in 1894 regarding the treatment of female patients in workhouses, arguing that women with gynaecological problems preferred to be treated by women doctors, and pressing home the need for women as workhouse doctors. In 1895, at a meeting of the Royal Academy of Medicine in Ireland, Dickson delivered a paper on the need for women to be appointed as Poor Law guardians in Ireland, to the resounding approval and support of those male colleagues present. She was also involved in the National Society for the Prevention of Cruelty to Children and the Irish Association for the Prevention of Intemperance.

Perhaps unsurprisingly, Dickson was interested in the rights of women within the medical profession. Her correspondence with the British Medical Association played a pivotal role in that organisation’s decision to open its membership to women, with Dickson becoming one of its first female members in 1892. Dickson was a great supporter of and advocate for young female medical students throughout her life and was the honorary secretary of a Dublin-based committee set up to advise women students embarking on their studies and early careers.

Dickson married Robert Martin, an accountant, in 1899. She gave up her career on marriage and had five children between 1901 and 1910: four boys, Russell, Kenneth, Alan and Colin, and one girl, Elizabeth (‘Betty’). Dickson’s husband enlisted for military service in the British Army in 1914, and Dickson moved with her children to England the following year. After sixteen years’ of almost total absence from the medical profession, she returned to practice in 1916, securing a post as Assistant Superintendent at Rainhill Mental Hospital in Lancashire, one of the largest asylums in Europe at the time.

Despite her return to medical practice, Dickson’s later life was dogged by frequent bouts of illness, and her career after about 1919 was characterised by short appointments and frequent re-locations until her death in 1944. Dickson undertook extensive locum work during this period in England, Wales, and, for a time, in Italy. She also owned and operated general practices in Shropshire and Tunbridge Wells, respectively, both of which she was forced to give up after a short time due to ill health. Dickson and her husband separated in the 1920s and she became solely responsible for her children. In 1940, almost twenty-five years after her first locum appointment there, she returned to Rainhill Mental Hospital, where she continued to work up until two months before her death at the age of seventy-seven from an incurable carcinoma.