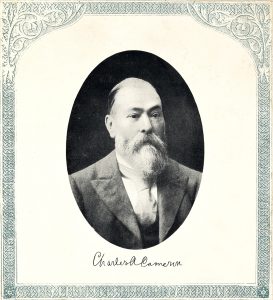 Sir Charles Alexander Cameron (1830-1921) was at various points in his lifetime a Fellow, Professor, President, and historian of RCSI, but is best remembered today for his contribution to improving standards of public health in Ireland in his capacity as Medical Officer of Health for Dublin from 1879 to 1921.

Cameron’s research, publications, and campaigning during his time as Chief Medical Officer led to dramatic improvements in living conditions, life expectancy, and general population health for the people of Dublin at a time when the city had some of the worst slums and highest mortality rates in Europe.

For the first time, and with the support of Heritage Council funding, RCSI Heritage Collections has digitised and made available online never-before-seen material from the Sir Charles Cameron papers. Spanning several thousand pages across almost half a century, these papers shine a light on the life and work of one of Victorian Dublin’s most influential citizens.

Handwritten diaries and scrapbooks chronicle Cameron’s daily life over the course of four decades. They recount the demands of public appointment and a busy academic career alongside the travails of a personal life oft touched by tragedy – five of Cameron’s children pre-deceased him, and he became a widow at the age of 53 with seven children ranging in age from one to sixteen years old.

A range of printed pamphlets, reports, and other writings authored by Cameron in his capacity as Medical Officer of Health document the dire conditions of Victorian Dublin and chronicle his relentless efforts to effect change for the benefit of the city’s most vulnerable inhabitants. These works demonstrate the enduring value of good public hygiene and sanitation as cornerstones in the fight against infectious disease – whether cholera and tuberculosis in Cameron’s time, or COVID-19 and the seasonal flu in ours.

Explore this treasure trove of archival material from the life and times of Cameron here.

Find out more about Cameron’s life and work in the online exhibition created by RCSI to mark the centenary of his death in 2021, or watch the video below to hear more about Cameron’s role in improving standards of public health in Dublin through the Heritage Council funded project to digitise his papers.

© Royal College of Surgeons in Ireland 2022
©2022 Preservica
We use cookies so that we can provide you with the best user experience possible. Click Accept to confirm that you are happy with us to use cookies.